The East is down to around 175 cfs now and the fishing down there has been pretty good for most anglers. Nymphing and streamer fishing has been the best, we’ve talked to a few anglers who have tried some dry fly fishing but with no success. For some reason they’re still eating some caddis nymphs but worms and small midge patterns have still been the best. We have had some pretty good streamer reports lately as well. The weather has been great lately so now’s a good time to get on the Walker!

The ranch has also been fishing very well lately, lots of streamer and nymph action going on down there. in addition to the flies listed above they’re still eating some rubberlegs and poxyback stones down there too.

We had anglers on the pond two different days this week, the first day it fished pretty well with 8 or so fish landed by one angler but the second day just one fish for each of two anglers. On the good day they mostly took small nymphs fished just below the surface as well as a fish or two on leech patterns. The weeds didn’t seem to be an issue for the anglers this week so that situation should keep getting better.

The Reservoir livened up a bit this week with some nice fish coming in both from boats and from the shore down near the dam. Pinched crawlers, mice tails, inflated crawlers all did well and the trollers have been using crawlers, needlefish, Rapalas and Thomas Bouyants. There hasn’t really been huge numbers of fish per angler but we’ve seen some nice rainbows up to just over 6 pounds and some browns up to nearly 5 this week.

Didn’t hear anything from Kirman this week, we’ll keep you posted when we do.

The Twins are producing some good fish here and there, again, not huge numbers but some good quality fish. We haven’t seen much activity by the browns yet but as the weather gets colder hopefully we’ll start seeing some of them. Bait anglers are having some success with mice tails, garlic power bait, pinched crawlers and inflated crawlers while lure anglers are using kastmasters, Thomas Bouyants and Rapalas.

The West is low and clear now and it’s been kicking out some good fish, mostly rainbows but we did hear of a brown or two this past week. Panther Martins and rooster tails have been good for the lure anglers, salmon eggs and night crawlers for the bait folks. Fly anglers are still having some success with hopper/dropper rigs as well as small buggers or attractor nymphs near the bottom.

The Virginias and Trumbull have all come on pretty strong this week with lots of nice fish being caught up there. There have been some good BFEF tagged rainbows, up to almost 6 pounds, coming in from up there. We have had some slow reports but most of the anglers we’ve talked to have been able to get into some nice fish. Kastmasters, Thomas Bouyants and mini jigs have been doing well and for bait try pinched crawlers and inflated night crawlers. 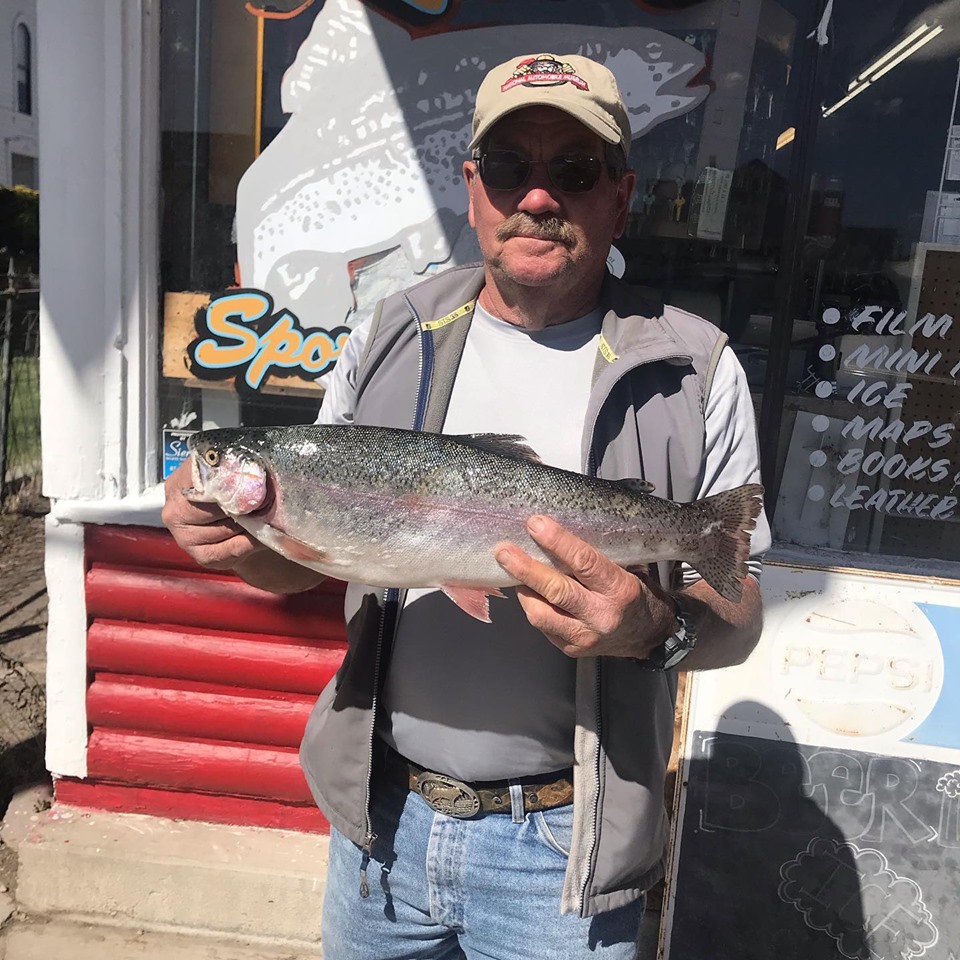