The East is running at about 126 cfs right now. We’ve had lots of good reports from the EW this past week, not necessarily from every angler we’ve talked to, but from lots of them. There has been some good dry fly reports as well as lots of good nymph reports. The streamer action still doesn’t seem to be that great but nymphing and dry fly fishing have been good. Most of the dry fly action seems to be after about 5:00 or so in the evening while the nymphing is best in the morning until around 11 and then again after about 4 in the afternoon. The 11:00 to 4:00 (approximately) time frame is pretty warm and it’s best to fish outside of that time frame. The caddis are still very active and caddis nymphs and dries have been doing very well.

The Sceirine is still fishing well, though like the California side we haven’t heard much about streamers. There is still some good dry and nymph action down there though. In addition to the flies mentioned above they are still eating some smaller golden stone nymphs and there has been some decent dry/dropper action with big uglies on top like a chubby Chernobyl and a caddis nymph or midge pattern below.

The pond fished pretty tough this week with just a few clients and just a few fish being caught. Sounds like the fish that were caught were caught on dries but the action was unfortunately pretty slow. It doesn’t sound like the weed situation is an issue yet, the fish just didn’t seem to want to cooperate this week. Hopefully if we have clients out there this coming week things will be better.

The Reservoir fished pretty good this week but I wouldn’t say it’s as good as I’ve ever seen it. Folks that are getting out there and working it hard are getting into some nice fish but it’s anything but automatic. Of course some of the good reports we’ve had included rainbows up to 6+ pounds and there were quite a few browns show up this week with the largest one tipping the scale at 7.25 pounds. There are still a lot of nice 2+ pound perch being caught as well. Successful trollers have been using needlefish, Rapalas, crawlers and Thomas Bouyants. Successful bait anglers have been using pinched crawlers, mice tails, inflated night crawlers and power bait. We haven’t talked to anyone fly fishing lately. It seems as though the fish are still cruising all over the upper half of the lake and haven’t really concentrated in the channels or other pockets just yet, this is probably why it’s been a bit tougher than usual. At some point they should start to move up into the channels and hopefully the success rate will increase.

Talked to a couple anglers who fished Kirman this week with no success at all. They reported seeing just a few fish rise and one or two fish cruising the shoreline but were unable to get any bites or hook-ups.

Like Bridgeport, the Twins are a little tough for some anglers while other anglers are still getting into some nice fish, rainbows have been reported in the 4 to 6 pound range and there was at least one 6+pound brown caught (and released) on the Lower Twin that we know of. Trolling Rapalas, crawlers and needlefish has produced some fish and bait fishing with inflated crawlers and mice tails has also produced some nice fish. Fly anglers have been enjoying some success with matukas, seal buggers and wooly buggers with soft hackle and pheasant tail droppers.

The West kicked out some nice fish this week with several rainbows in the 4 to 5 pound range as well as at least one nice brown in the 20+ inch range caught and released that we know of. Bait anglers are having success with mini crawlers, salmon eggs and power eggs, lure anglers are using mini jigs, panther martins and roostertails. Fly anglers are doing well with hopper/dropper rigs as well as dries like humpy’s, elk hair caddis and parachute adams. It sounds like the canyon section along highway 395 has been the best area to fish lately

The Virginias have also been kicking out some nice fish for most anglers, though some anglers are also not doing as well. We have seen some of those 4 to 6 pounders coming in from the Virginias as well. Mini jigs, kastmasters and Thomas bouyants have been doing well for the lure anglers, bait anglers are using mice tails, crawlers, pinched crawlers and power bait. Fly anglers are using seal buggers, matukas, mini leeches, soft hackles, beetles and zug bugs.

The Bridgeport Fish Enhancement Foundation had their annual fishing derby yesterday and it was a great success! There were lots of nice fish weighed in up to 7+ pounds! It sounded like the dinner and raffle after the derby was also a great success with social distancing practices taking place to keep all the anglers safe. This is a great Foundation that puts lots of nice fish in local waters all season long! 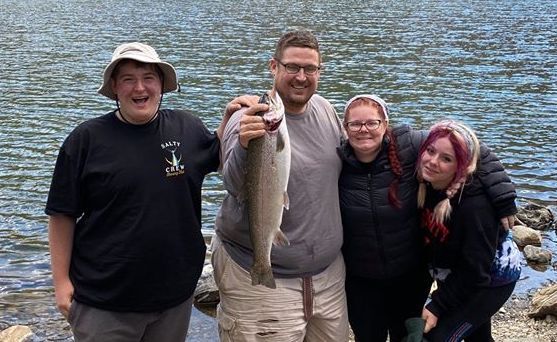