The East is still running at about 95 cfs right now. We’re still getting some pretty good reports from anglers who are fishing early in the mornings and late in the evenings with some 23”+ fish also being reported. The more successful angelrs are reporting 5 or 6 fish for their time down there. There’s still been a little dry action here and there, mainly in the evenings. Nymphing is still the best bet, unless you’re on the water when the fish start looking up. The weather is still pretty hot so it’s best to stay off the water during the heat of the day. We’re still looking forward to the weather getting cooler and when that happens the fishing should get better and better.

The ranch also fished pretty well this past week though we only had a few clients on the water there. There were some pretty good hopper/dropper reports as well as a few fish caught with crawdad streamers. Anglers seemed however to do the best with small caddis nymphs and midges.

We haven’t had anyone on the pond for the last couple weeks, we’re kind of waiting on the weather to cool down a bit and when this happens the action should get better out there.

Not much action going on lately on the Reservoir, unfortunately the water temps are probably going to have to cool down a bit before things start looking up out there.

We didn’t hear any news from Kirman this week but will pass on any info we get when it comes in.

The Twins are still kicking out some fish lately, there’s been a few fish caught trolling, bait fishing as well as fly fishing. The best times to be out there is early in the day and late in the evening. Baits to try include pinched crawlers, power bait, inflated crawlers and mice tails. For lures go with mini jigs, Kastmasters and Thomas Bouyants. For flies try mini leeches, Twin Lakes Specials, soft hackles and zug bugs.

The West has been a bit tough lately with the lower water levels and high temperatures. There have been a few fish caught here and there in spite of this from what we’ve heard though. There are still a few fish eating hoppers and attractor nymphs for the fly anglers and there’s been a few bait anglers having some success with eggs and worms. As with the other waters it’s best to be there early and late in the day when the fish tend to be more active.

We’re still getting some pretty decent reports from the Virginias with a 7 lb 7 oz BFEF tagged rainbow coming in from Trumbull Lake yesterday on power bait. It seems like most every day we’re seeing at least 1 or 2 of these nice big rainbows coming in from up there. Successful anglers have been using power bait, mice tails, Thomas Bouyants, mini jigs. And for the fly anglers it’s been wooly buggers, mini leeches, soft hackles and copper johns.

The smoke situation was pretty good for most of the week, however, the Creek Fire blew up pretty good yesterday and a lot of smoke has been blowing in from there. The valley is pretty smoky today but this can change at any time depending on which way the wind blows. We’re all praying for the safety of all the firefighters and anyone near any of the numerous fires that are burning on both sides of the Sierra. There are likely to be some area closures due to the fires and we’ll try to keep you informed of these as best we can when we get information from the Forest Service. 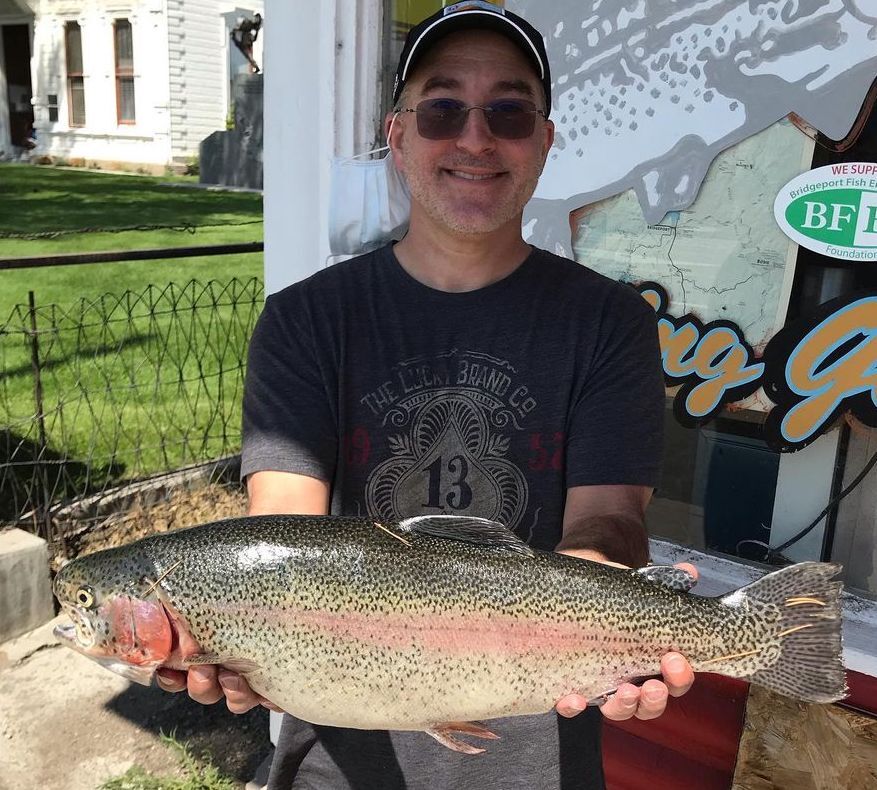