The East is running about 53 cfs right now, the fishing down there has been pretty good with most anglers reporting from 5 to 10 fish for a half days worth of fishing. Most of the good reports we’ve been getting have been with nymphs but we’re starting to get some good reports on streamers now as well. There have been quite a few fish reported that are over 20 inches lately which is really great to hear. Some patterns to try: dead drift crayfish, zuddler, dali lama, sculpzilla, psycho prince, top secret midge, micro stone, copper john, zebra midge, flashback emerger, san juan worm.

The ranch fished well earlier in the week but there hasn’t been anyone out there for the last several days. They were still hitting some stonefly nymphs as well as some good topwater action with stimulators and chubby Chernobyl’s. With the streamer action opening up on the Cali side I’d expect there to be some good streamer action on the ranch as well.

Bridgeport is still doing well for anglers trolling or casting lures from the shore as well as bait fishing from the shore or over near Rainbow Point. Lots of browns being caught in the 2 to 5 pound range as well as some good rainbows up to nearly 7 pounds. Trollers have been using night crawlers, Rapalas, Speedy Shiners and Thomas Bouyants, bait anglers have been using garlic power bait, inflated crawlers and pinched crawlers.

Here’s an update to the Bridgeport Reservoir report I received via email this morning:

How about some truth in your advertising ---- > I just spent the last week pounding The reservoir with most of what you mentioned for 4 fish in 6 days... lots of wind... shallow, dirty water, and VERY poor launching conditions... Someone needs to make some adjustments to the crappy launching areas (like scrape some rocks out of the ramp area) I know it’s all about marketing to get some people up there to spend their $$$’s , but comon man how about some honest reports.  I spoke with several locals and a guide, everyone seems to be scratching out 1 or 2 fish per day...

We didn’t hear any news from Kirman yet, hopefully there are still some fish in there leftover from last year but it’s hard to tell. Last year the fishing up there was pretty tough with just a few successful reports coming in for the whole season. Hopefully the DFW will be able to get some fingerling fish in there this year and get the fishery back on track.

The Twins have been fishing excellent the last few days, lots of large browns and some good rainbows are being caught up there. There’s been lots of browns in the 2 to 5 pound range and even some going over 12 pounds this week. Trolling has been the best producer with Rapalas, Kastmasters and Thomas Bouyants. There’s also been some good action from the shore floating power bait, crawlers and mice tails.

The West is a little blown out right now with the snow melt coming down, it’s off color and a bit high. There has been some anglers fishing it but it sounds like it’s been fairly tough on them. There’s a below average amount of snow on the mountain this year so the run-off shouldn’t last too long this year.

It sounds like they’re still fishing Big Virginia through the ice, at least for now, and getting into some good action. Little Virginia hasn’t iced out enough to fish much but enough that you probably shouldn’t be out on the ice. I’d guess within the next week or so it should be fishable up there.

If you would like to receive this report via email, drop me a line at reidfly63@yahoo.com and I'll get you on the list!

We’ve had some windy days this past week but overall the weather has been pretty good. There were lots of Bridgeport Fish Enhancement fish caught this past week with some going over 7 pounds! Mothers day is coming up next week so don’t forget Mom!!
Previous Report 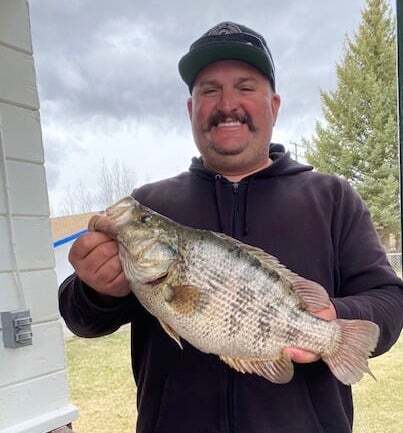